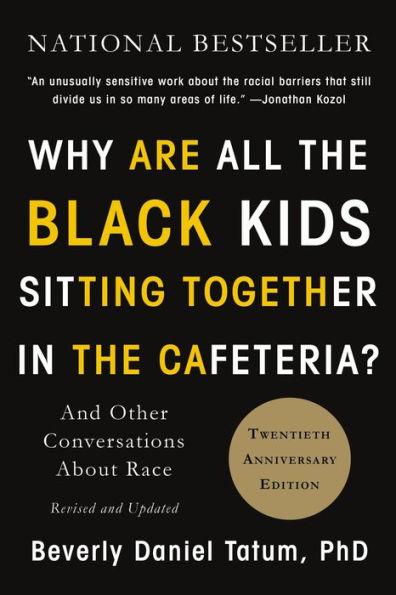 As of the time of publication, nearly every single book on the NY Times Non-Fiction Bestseller list is about race. Let’s help make racial equality a movement, not a trend.

These books are on our nightstand, highlighter in hand.

And don’t forget to shop consciously! Buy your books from these spots:

EsoWon Bookstore: Longstanding Black-owned LA bookshop spotlighting a range of titles about & written by African American people. The most heartwarming message is up on their website, which just launched this month: “Thank you for purchasing from EsoWon.  The last 4 days have seen a overwhelming amount of orders.  We never anticipated anything like this and We Love Seeing the orders, but we are several days behind in filling the orders.”

The Shomburg Shop: Every purchase supports the Shomburg Center for Research in Black Culture at The New York Public Library. An emporium for the best in black-related products with hundreds of items ranging from books for adults and children, desk items and toys, unique gifts, and more. Like the Schomburg Center, the shop’s selections are chosen to inspire learning and advance knowledge.

Between the World and Me
Winner of the National Book Award for non-fiction and 62+ weeks on the NYTimes bestseller list. A meditaion on race in America as well as a personal story, framed as a letter to the author’s teenage son. Image: goodreads
White Fragility
“A historical and cultural analysis on what causes defensive moves by White people and how this inhibits cross-racial dialog.” – NYTimes Image: Schomburgshop
Why Are All the Black Kids Sitting Together in the Cafeteria?
“The classic, bestselling book on the psychology of racism — now fully revised and updated….Walk into any racially mixed high school and you will see Black, White, and Latino youth clustered in their own groups. Is this self-segregation a problem to address or a coping strategy? Beverly Daniel Tatum, a renowned authority on the psychology of racism, argues that straight talk about our racial identities is essential if we are serious about enabling communication across racial and ethnic divides.” -oneKIN Image: OneKin
Raising White Kids
“With a foreword by Tim Wise, Raising White Kids is for families, churches, educators, and communities who want to equip their children to be active and able participants in a society that is becoming one of the most racially diverse in the world while remaining full of racial tensions. For white people who are committed to equity and justice, living in a nation that remains racially unjust and deeply segregated creates unique conundrums.” – Goodreads Image: People Get Ready
So You Want to Talk About Race
“Ijeoma Oluo explores the complex reality of today’s racial landscape–from white privilege and police brutality to systemic discrimination and the Black Lives Matter movement–offering straightforward clarity that readers need to contribute to the dismantling of the racial divide” – Goodreads Image: Cultured Books
White Kids: Growing up with Privilege a Racially Divided America
American kids are living in a world of ongoing public debates about race, daily displays of racial injustice, and for some, an increased awareness surrounding diversity and inclusion. In this heated context, sociologist Margaret A. Hagerman zeroes in on affluent, white kids to observe how they make sense of privilege, unequal educational opportunities, and police violence. In fascinating detail, Hagerman considers the role that they and their families play in the reproduction of racism and racial inequality in America – Pyramid books Image: Pyramid Books
Films and TV Shows for Adults:
1. The Hate You Give (Pg-13, 2018, Drama/Crime)– Film
The Hate You Give (Pg-13, 2018, Drama/Crime)– Book
“Starr Carter is a 16-year-old black girl who lives in the fictional, mostly poor black neighborhood of Garden Heights, but attends an affluent, predominantly white private school, Williamson Prep. After a gun goes off at a party Starr is attending one weekend, Starr is driven home by her childhood best friend, Khalil. On the way home, they are stopped by a white police officer. The officer has Khalil, who is black, exit the car; while outside the car, Khalil reaches inside his car via the open driver-side window to check in on Starr, and picks up a brush. The officer, thinking Khalil picked up a gun, fires three shots into Khalil, killing him. Khalil’s death becomes a major national news story. Starr’s identity as the witness is initially kept secret from just about everyone outside Starr’s family – leaving Starr’s two best friends, Hailey Grant and Maya Yang, and Starr’s white boyfriend, Chris, who all attend Williamson Prep together, all unaware of Starr’s connection to the news story. Having to keep this secret weighs on Starr, as does her need to keep her Williamson and Garden Heights personas separate”.. (imdb) Image: imdb
2. 13th – Netflix original
Documentary which explores the history of race and the criminal justice system in the United States” -NPR Image: teenvogue
3. Fruitvale Station
“The film depicts the story of Oscar Grant III, a 22-year-old from Hayward, California, and his experiences on the last day of his life, before he was fatally shot by BART Police in the early morning hours of New Year’s Day 2009. The movie begins with the actual footage of Oscar Grant and his friends being detained by the BART Police at the Fruitvale BART station in Oakland on January 1, 2009, at 2:15 a.m. right before the shooting.” Image: rottentomatoes
4. Whose Streets?
“Told by the activists and leaders who live and breathe this movement for justice, Whose Streets? is an unflinching look at the Ferguson uprising. When unarmed teenager Michael Brown is killed by police and left lying in the street for hours, it marks a breaking point for the residents of St. Louis, Missouri. Grief, long-standing racial tensions and renewed anger bring residents together to hold vigil and protest this latest tragedy. Empowered parents, artists, and teachers from around the country come together as freedom fighters. As the national guard descends on Ferguson with military grade weaponry, these young community members become the torchbearers of a new resistance. Filmmakers Sabaah Folayan and Damon Davis know this story because they are the story. Whose Streets? is a powerful battle cry from a generation fighting, not for their civil rights, but for the right to live.” -Rotten Tomatoes
5. Get Out
“When a young African-American man visits his white girlfriend’s family estate, he becomes ensnared in a more sinister real reason for the invitation” -IMDb
6.When They See Us -streaming on Netflix
“Five teens from Harlem become trapped in a nightmare when they’re falsely accused of a brutal attack in Central Park. Based on the true story.” -IMDb
7. Dear White People (Netflix tv show series – light-hearted but also deals with serious topics)

This Netflix series, based on Justin Simien’s movie of the same name, follows a group of black students at a predominantly white university. One student, Samantha White (Logan Browning), starts a podcast directed at white students. The series explores colorism within the black community, class and activism, among other themes.”

“It’s a comedic and satirical look at the way black people are viewed and the way they have to compose themselves when they’re in largely white environments,” says Hunt. – USA today

8. Black-ish (TV show, can stream or watch live through ABC – lighthearted but also deals with serious topics)
“The program follows Andre “Dre” Johnson, a wealthy executive, and his family through the usual sitcom misunderstandings, squabbles and moral dilemmas. So far, so Cosby Show. But Black-ish’s creator, Kenya Barris, has made a small tweak that sets the program on to an altogether more groundbreaking track. Race is not treated as an incidental background detail but part of the show’s identity. The Johnsons are not a family who “happen to be black” but a family who are black. If that doesn’t sound revolutionary, it’s enough to ensure this broad, warm-hearted comedy confronts issues of race, class and culture every week.” – The Guardian
Also fun fact: Obama enjoys watching this tv show because “For Barack Obama, the show is like watching his own family on screen” – The Guardian
9. The Innocent Files Netflix original
“The Innocence Files dives deep into three major causes of wrongful conviction: the use of flawed forensic science, in this case the debunked “science” of bite mark evidence; the misuse of eyewitness identification; and prosecutorial misconduct. The series’ three parts — The Evidence, The Witness and The Prosecution — devotes three episodes to each topic. The series also explores the roles that race and racism play within the criminal justice system.”